By Blake BintThe University of South Wales netballs 1sts completed their third consecutive win this season with a tight win over Swansea 2nds at the Sport Park.

Having lost the reverse fixture, USW were looking to continue their strong form of late while attempting to gain revenge over their Welsh rivals.

Both sides came out the blocks strong with all four attackers finding their range very early on in the first quarter. Ali Chan, in particular for USW showed remarkable shooting from range throughout the match leading to a 27 points tally for the match.

The 12-9 scoreline in favour of the visitors after the first quarter wasn’t a true reflection of the first 15 minutes as both sides were very evenly matched. Swansea captain and centre, Bethan Harris, stood out in the opening quarter with impressive pinpoint passing, transitioning the ball from the middle and final third into the shooting circle while also showing plenty of intent in defence. 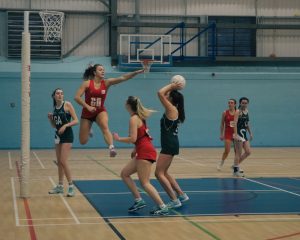 USW moved up to joint top with the win over Swansea

The visitors started slowly in the second quarter, giving USW the chance to take advantage of the match. They managed to come back to create a six-point lead. At 19-13, Swansea began to find that final pass once again and with Darcy Hastie on top scoring form, the game was quickly drawn back to 21-20 at half time.

The second half never saw more than a three point gap separate the two sides. The pendulum continued to swing back and forth. Niamh Parry, in goal defence, played a crucial part in Swansea’s strong defence in the third quarter, limiting USW to only nine points in the quarter.

The match reached a deadlock at 30 points a piece going into the final quarter. Players’ fatigue seemed to disappear, despite both showing signs earlier, as the sides gave everything they had for the final 15 minutes. Swansea gained the upper hand in the first part of the final quarter with Hastie continuing her form, Swansea had themselves a two-point lead at 37-35 with five minutes left on the clock. USW attackers, Chan and captain Megan Jones managed to bring the hosts back into the game in the final few minutes.

With the match swinging back in favour of USW at 39-38, a misplaced pass led to a two on one attack to put the game to bed. Swansea goal keeper Anna Melmoth made what seemed to be a gave saving interception when she read Jones’ pass to Chan in the shooting circle. This interception sparked a counter attack of their own in attempt to level the game with a final attack.

USW defenders Holly Griffiths and Molly Carre along with Aggie Farlow-Hoare at wing defence who had been an unsung hero all match managed to remain composed and hold out for the final whistle to give the hosts the win by a point.

A result that pushes USW onto level points with Cardiff Met at the top of the table and now two wins clear of Swansea in third.