USW Women’s 1st got back to winning ways with a 22-12 victory over their Bath University counterparts at the Sport Park.

After falling to defeat last time out against Cardiff Metropolitan, losing 48-10, Mark Hutton’s side bounced back with a hard-fought success.

In a game riddled with injuries and stoppages it was the away side that started off on the front foot.

A fine off-load from Elana Tumility-Gutierrez to Shannon-Mae Watkins allowed the full-back to power through for the first try of the game, converted by fly-half Madison Hughes.

USW shook themselves from a somewhat lacklustre start and a strong turnover from the captain Keely Ward lifted their spirits. 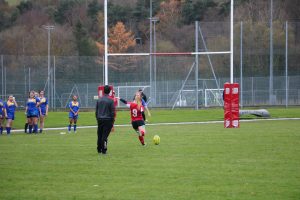 The hosts soon got their reward when, in the 20th minute, Emily Pratt went over for a try which was converted by Megan Tate to level the score at 7-7.

Bath replied almost instantly with a long carry down the left wing from Watkins for her second of the game but in the last seconds of the first half USW drew level at 12-12 with a try by Lauren Read.

A very even second half with little chances for both sides changed late on when, in the 73rd minute, Pratt topped off a good individual performance with a winning try.

The tension was high in the last few minutes, but USW held strong and saw out the game.