UNIVERSITY of South Wales Women’s 1st drew 10-10 with Swansea University Women’s 2nd at USW Sport Park – though a scoreline error initially led the hosts to believe they had won.

The referee realised the mistake – he had thought USW were 10-9 ahead – only after blowing what the teams thought was the final whistle.

A few extra minutes were eventually played before honours really did end even, albeit amid a degree of confusion.

It was a fast start with both teams looking dangerous on the counter-attack.

But it was Swansea who took the lead through the impressive Isy Stedman in the second minute. Stedman came close again a minute later but was just wide of the target.

USW began to grow into the game with influential captain Hannah Westhenry leading the charge.

It was only a matter of time before the home side grabbed an equaliser and it duly came from Westhenry, who showed her quality throughout.

A topsy-turvy first-half saw Stedman score again for Swansea before Hope Cooke made it 2-2 after some impressive USW build-up play.

The end-to-end pattern continued when Vicky Hayden made it 3-2 to the visitors before USW skipper Westhenry equalised at the end of the first quarter after initially being denied by Becky Nelmes. 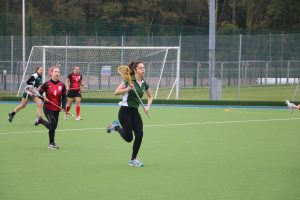 The second quarter started in equally entertaining fashion when Swansea’s Stedman ran through the USW defence straight from the face-off and made it 4-3, completing her hat trick.

At that stage Swansea started to dominate and could have made it 5-3 if not for a fantastic block by the USW defence.

However, just two minutes later it was 5-3 when attacker Chloe Matthews grabbed her first goal of the match.

But USW refused to roll over and by the end of the second quarter were level at 5-5 through strikes by Holly Sheppard and Cooke. 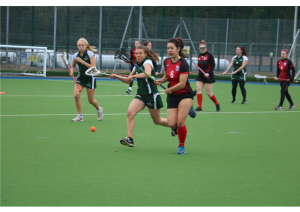 USW began the second-half in full throttle as No.7 Stefanie Albers scored directly after possession was given away from a wayward pass by Swansea goalkeeper Nelmes.

Albers was soon on the scoresheet again as she scored directly on the counter-attack but the two-goal lead didn’t last for long after Swansea converted a penalty through Maria Maplesden.

Steadman and Maplesden hit further goals for Swansea, and Westhenry added to her tally for USW as the match ebbed and flowed in the final stages.

But they couldn’t be separated at the end, with the result being just about the right one. 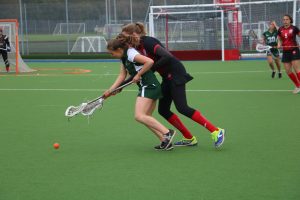