From start to finish USW struggled to make any headway against a visiting side that enjoyed a monopoly on possession.

The Medics were merciless in their assault on the USW goal, with goal attacker Olivia Williams securing 17 points in
the final quarter. Her display typified the Medics’ dominant performance.

Defence continues to be a growing issue for the USW 4ths, with the Medics finding it far too easy to pick holes. 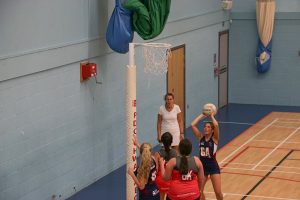 It was a quartet of Williams, Ellie French, Olivia Ireland and Martha Lawrence who proved to be the kryptonite for USW, with each of them securing over 15 points.

Matters only became worse for USW in the final quarter as goalkeeper Abi Rumble went down with an ankle injury in the 53rd minute following an accidental collision with Williams.

Fortunately Rumble was soon back on her feet and resumed her normal defensive duties.

Yet despite Rumble’s bravery, there was no stemming the Medics’ attacking onslaught.

The away side never eased off in the final quarter during which Ireland and Williams racked up 25 points between them.

The Medics also possessed a quality in defence.

The goal keeping was exceptional with Jasmine Chrisene keeping out a number of attempts from USW, and really made it hard for them to penetrate a very tough defence.

Looking ahead, it seems USW need to focus on their defensive game, not only did they struggle with the might of the Medics, but they found it difficult to adapt when Cardiff continued to switch up their strike partnership between Williams and Ireland, as well as Lawrence and French.