JAYNE LUDLOW has had what is considered one of the most decorated careers in world football.

The former midfielder has 61 caps for her nation, along with 26 trophies for Arsenal, over a career spanning 14 years.

She is Arsenal Ladies’ all-time record goal scorer (over 200 goals) and was part of the side that won a legendary quadruple in 2007.

Being a record goal scorer and champion of the highest order, you’d expect Jayne’s attitude, ethos and expectations to rub off on her players.

During a recent conference at the USW Sport Park, Ludlow outlined the various priorities and cultures she is looking to instil in her Wales squad.

One aspect Ludlow was particularly focusing on was her D.P.L (Discipline, Practise, Love) ethos. 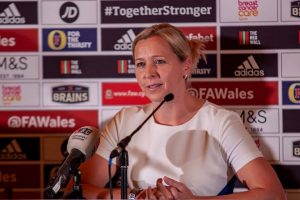 “If you don’t love what you do, you’re not going to put in those hours,” Ludlow said during her conference presentation.

One thing that was clear is that the Wales manager does indeed love what she does and is completely dedicated to building a winning nation.

With the trophies, accolades, passion and dedication Jayne displays, who could possibly argue that she is the woman to do just that?

The most impressive part of her time as Wales manager, was when she was awarded Coach of the Year in November 2018.

Although her side narrowly missed out on a place at the FIFA Women’s World Cup, impressive victories against Bosnia and Herzegovina, Russia and Kazakhstan showed the footballing world that Wales has arrived, that they’re here to stay and that they’re only getting better.