WALES and Russia U19s shared the spoils in a closely contested match in the European qualifiers in what was very much a game of two halves.

Two penalties from Neco Williams looked to cancel out a first-half opener from Kirill Kosarev, but a late leveller from Danila Prokhin saw the match end all square.

The Russians came out the blocks and dominated the early stages. Wales were given an early warning when Igor Shkolik was picked out in the box with space to shoot, but his effort sailed over the crossbar.

Determined play from the visitors saw them dispossess the Welsh backline twice in quick succession, but blushes were spared by Liverpool product Williams who blocked a golden opportunity for Kirill Krvatsov. Kosarev looked destined to convert the rebound but the ball was expertly tipped over by stopper Lewis Webb.

Russia continued to knock on the door, and a quick give and go saw tricky winger Stepan Oganesyan bearing down on goal but he also lashed his effort off target. 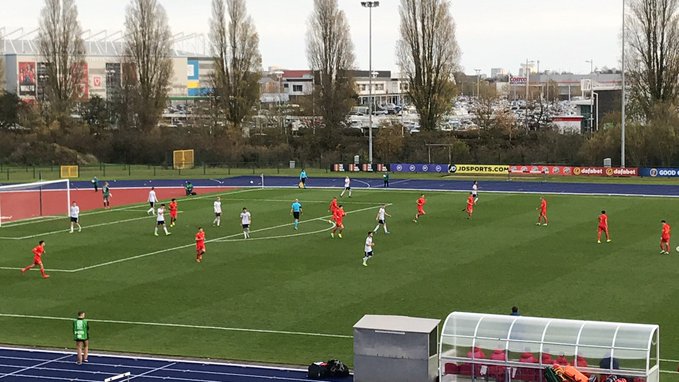 Moments later, a threatening whipped corner led to a free header for the dangerous Kosarev, but Swansea prospect Webb showed great athleticism to palm away what looked to be a certain goal for Russia, and the save was met with a standing ovation from the home crowd.

The hosts struggled to find any openings, and their first shot came from a speculative long-range effort from Williams, Ivan Budachev was taking no chances in the Russian goal but the ball drifted wide.

The deadlock was finally broken in the 34th minute, as Kosarev got the goal he thoroughly deserved, the lively striker pounced on a rebounded effort and had acres of space to drill the ball past the impressive Webb, who was having a very busy afternoon.

To make matters worse for Wales, the resolute Webb was forced off through injury after a nasty collision with goalscorer Kosarev, and was replaced by Daniel Barden.

Wales finally began to trouble the Russian defence moments before the interval, and some tidy footwork from Sam Pearson was followed up with a dangerous low cross, but the stretching Christian Norton couldn’t quite connect.

The host’s momentum persisted into the second half, as a goal-mouth scramble wasn’t dealt with by the Russian defence, and the ball fell to newly introduced Harry Pinchard but his low drive was held by Budachev.

Wales’ second half dominance paid off as they were awarded a penalty in the 75th minute after Russia failed to clear an inviting corner from Princhard, and the referee pointed to the spot after the ball was handled. The nimble Williams then stepped up to confidently send Budachev the wrong way.

Dan Griffiths was introduced with towards the latter stages, and his fresh speed caused trouble for the Russian backline instantly. The winger was hacked down in the penalty area and Wales were awarded their second spot-kick in the 82nd minute,  with Williams showing great composure to complete his brace.

Wales’ lead was short-lived though, as Edgar Sevikyen flashed the ball across goal, and his cross was met by Prokhin who headed the ball powerfully past the helpless Barden to level the scores.

Rob Edwards’ side remain top of Group 5 after avoiding defeat in their first two games, and next up for Wales is the visit of bottom-placed Kosovo to Rodney Parade on Tuesday afternoon.

by Joe Mansfield LAUDED as a ‘proper 6’, Shane Lewis-Hughes will enter the test arena on Saturday afternoon, when Wales play Scotland in their final game of the Guinness Six Nations Championship. The 23-year-old blindside […]

by Ethan Harris WARREN Gatland will look to dig deep into his reserves for the national side come February, as Wales have to replace several key figures ahead of the Six Nations. Gatland will be […]

by Jack Cook WALES face France in an international friendly and 19 years old Louis Rees-Zammit is on the bench, but many say he should be starting. The Welsh wonder-kid has been grabbing the headlines […]