USW got their first victory of the season, despite finding themselves a goal down after just three minutes.

The 3-1 win means they have not lost at the Treforest Sport Park since January 2017 and it was the perfect response after a 2-0 reverse away at Hartpury in their opening encounter.

USW’s sloppy start saw boss Lee Kendall alter the shape of last year’s champions which enabled them to exert sustained pressure later on in the game as Exeter tired.

The hosts struggled to get a grip on the game for significant periods, but when they began to threaten the Exeter defence with cross-field through balls they caused their opposition problems.

Exeter opened the scoring their lead when Adrian Westondrop found the right corner from just outside of the box. 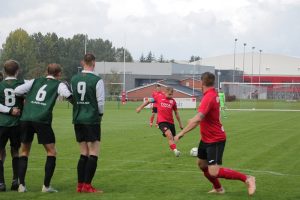 The home side’s first attack came through captain Kane Owen. He was eventually fouled on the edge of the box following a tricky run, but the resulting free-kick flew wide of the post.

USW found an equaliser after Liam Edwards was able to beat his man on the left wing.

Edwards’ looping cross into the danger area was met by Exeter’s goalkeeper John Ross, but he stumbled and failed to prevent the ball bobbling into the back of the net.

USW nearly made it two before the end of the half, as Tristan Jenkins found space down the right and was able to beat his man but his shot flew the wrong side of the far post.

After constant attacking threats at the start of the second half, Owen sent a low ball into the danger area into the path of Cameron Keetch who put USW 2-1 ahead. 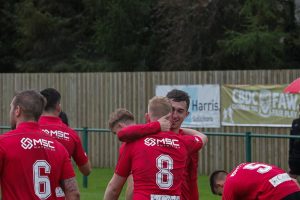 Kendall’s side were unlucky to have not extended their lead shortly after, with John Ross making a double save as he saw his defenders clear the ball to keep their hopes alive.

USW then found what they needed – a another goal to make certain. And it was skipper Owen who obliged, finding the bottom corner after a well-worked move.

It was to prove enough. USW managed to see out late Exeter pressure and there was relief among the home ranks come the final whistle.